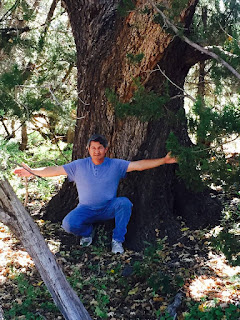 Michael Martin Melendrez grew up in Las Cruces New Mexico, working alongside his father on the family farm and working as a farm laborer in the onion fields of the Mesilla Valley picking onions as a teenager.His father inspired his interest in soil when in 1968 while teaching Michael how to judge soil for the upcoming State 4-H contests he said to his son, “Michael, everything we do in farming is wrong and it destroys this, we need to do a better job of taking care of our soil.”
Michael’s dad was a 5th generation farmer and a dealer of John Deere farm equipment, so his words were a powerful message to Michael. As a result of Sam Melendrez training Michael on how to judge soil, Michael went on to win a Blue Ribbon at the State 4-H contests that year.In his first year of college in 1974 Michael wrote a paper for a class titled ‘Soil Ecology and the Soil Food Web’ where he described what today is accepted by soil scientists worldwide as an accurate description of how nitrogen flows through the trophic levels of life in the soil.It’s possible that this paper is the first time the phrase Soil Food Web was used.Years after Michael’s 4-H victory in soil judging, Sam Melendrez helped Michael start a tree growing business with a retail nursery called Trees That Please.In the early years Michael and his father and his family planted thousands of trees each spring, creating a pipeline of future tree inventory for the nursery.Since the early days of father and son working side by side, Trees That Please Nursery has focused for over 35 years on the production of Southwestern native hardwood trees that are appropriate for urban landscaping in the Southwest, requiring less water than those tree species historically sold by the nursery trade.From the beginning of his business career Michael remembered his father’s words about caring for the soil and as his knowledge of chemistry and soil science grew. He began to understand that fertilizers and many of the strong chemicals sold to farmers and to homeowners as lawn and garden chemicals were destructive to the health of soil, so Michael made a choice to never use or sell these products in his retail nursery.Starting three decades ago Michael began developing products that could be used to grow his trees and support his customers efforts to improve the health of their soil, so his trees stood a better chance of success.This led to the founding of a new company called Soil Secrets LLC a leading biotech soil science company.The objective of Soil Secrets was to research and develop bio-mimicry products that could fix the ecology of soil which would then grow healthier landscapes and more productive crops, while also helping to use less water.Michael’s slogan is “Maximum Green with Minimum Water”. Today Soil Secrets LLC is the industry’s leading Biomimetic Soil Ecology company and is used by large pecan growers in both the United States and Mexico, potato farms in Idaho and Montana, wine growers in Mexico and now hemp growers across the country. The molecular biology products of Soil Secrets are also specified in mine reclamation and used in the construction of LEED Certified landscapes.During the process of developing the Biomimetic products offered now by Soil Secrets, Michael became the first person ever to unravel the mystery of Nature soil molecular carbon matrix and with this information he can replicate the molecules which are used to correct and balance the bio-geo- chemical process of a damaged soil.The molecular characterization research was done with the help of Los Alamos National Labs and Sandia National Labs under the authority of a Commercial Proprietary Information Contract. He conducted Proof of Concept research with the Technology Transfer Programs of Los Alamos National Laboratory, Sandia National Laboratories and the New Mexico Consortium Labs, where he developed the tools to many of the soil problems found across the globe.In addition to Michael’s Trees That Please Nursery business and his Soil Secrets business, he also planted and developed one of the largest tree species collection in the region called the Arboretum Tomé. The arboretum collection has many tree species of the world growing, one of the largest oak species collections, and a collection of over 200 heirloom apple tree varieties.

Goatheads ( Tribulus terrestris ) are native to Southern Europe, Asia, Africa and Australia. Goatheads are also called stickers, sticker weed, bullhead, devil’s weed, and puncturevine. Goatheads are easily recognized by their prostrate growth form, leaves with leaflets, yellow flowers, and stickers (Goatheads). If you miss’em visually then they will stab you painfully in the fingers as you work your garden, or stick to your clothing and shoes. Goatheads are the primary reason local bicyclists must get “thorn proof” tires for riding on area trails and streets. Goatheads have prostrate stems that radiate outward from one central point. Leaves are compound with smaller leaflets. Lemon yellow flowers form along the stems and fertilized flowers form fruits.   Fruits consist of several attached structures called nutlets (Goatheads). Each nutlet is a single seed that becomes hard or woody when mature. Each seed has two sharp spines that easily penetrat
1 comment
Read more

The Western Soapberry tree ( Sapindus saponaria var. drummondii ) is native to New Mexico. It grows wild from Missouri, Arkansas, and Louisiana westward through Texas, Oklahoma, Kansas, Colorado, Arizona, and Mexico. The fruit of the Western Soapberry tree is a drupe. Mature fruits are translucent, amber colored, and contain a black seed. The mature fruit without the seed will produce a good lather with water and has been used as a soap substitute. Fruits persist on the trees through winter. T he Western Soapberry tree can grow 1′-2′ annually reaching 25′-30′ tall and wide making it a good sized shade tree. Fall leaf color is an attractive golden yellow. Currently, there are no improved varieties of the Western Soapberry Tree. It grows well on the alkaline soils of New Mexico and is very tolerant of heat and drought once established. This tree is rarely affected by disease or insect pests making it an ideal specimen tree for your yard or landscape. S
1 comment
Read more

Sand Bur ( Cenchrus longispinus ) is native to North America. It has other names like sand spur, long-spined sand bur, hedgehog grass, and bur grass . Sand Bur is an annual grass usually growing with a prostrate growth form. It is similar in appearance to other grasses prior to seed formation. Individual plants may be 3’ in diameter, sometimes larger. Sand Bur is a common weed of sandy soils but also grows well elsewhere. Sand Bur will often root at stem nodes that are touching the ground. The root system of Sand Bur is shallow and fibrous making them easily pulled (when immature). Sand Bur produces a flowering spike. As seeds begin to form Sand Bur is easily recognized by its numerous sharp or burred seeds or long spines. As the burred seeds mature they are easily separated from the mother plant and their sharp spines stick to virtually anything. Sand Bur can disseminate its seeds long distances because its sharp spines will hitch a ride on skin, animal hides,
5 comments
Read more