Plant of the Month: Dawn Redwood

March 01, 2012
Dawn Redwood  (Metasequoia glyptostroboides) is a fast-growing, deciduous tree and is considered the ancestor of all redwoods (photo). 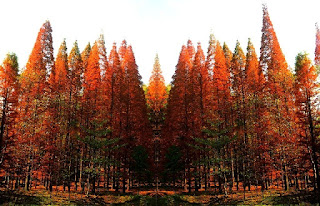 Dawn Redwood is one of three species of conifers known as redwoods.  The other two redwood species are the California Coast Redwood (Sequoia sempervirens) and the Giant Sequoia (Sequoiadendron giganteum). It is native to where it grows to 200 feet or more in height. It is considered a living fossil because it was thought extinct until its discovery in in 1944.  In 1948, the Arnold Arboretum of Harvard University located in sent an expedition to collect seeds and, soon after, seedling trees were distributed to various universities and arboreta worldwide for growth trials. The  Arboretum Tome  in maintains 33 different seed lines or representatives of the Dawn Redwood on its grounds.
Dawn redwood is often confused with the Texas Redwood or Bald Cypress (Taxodium distichum). One easy way to differentiate between the two is that the needles or leaflets on Dawn Redwood are opposite (photo), meaning directly across from each other, while on the Texas Redwood and the Native New Mexico Redwood (Taxodium mucronatum (neomexicana)) the needles are alternate (staggered). 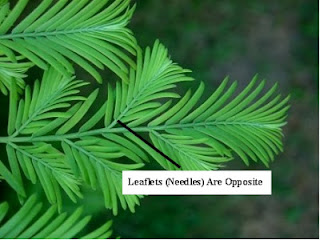 If water is not limiting, the Dawn Redwood can grow 4′ per year ultimately reaching 60′ – 70’ tall and 25′ – 30′wide. Prior to leaf drop each autumn, leaf color changes to an intense orangish-red or burnt orange color. Growth form is pyramidal. It is not a drought tolerant tree and does best with regular water. It is hardy to USDA Zone 4. Trees That Please Nursery has the Dawn Redwoods available in both 5 and 15 gallon container sizes.
Written By:
Stephen Sain
Staff Plant Physiologist

Anonymous said…
Will the Dawn Redwood grow in our alkaline soil here in Albuquerque? I was told by an employee of Jericho nursery that I'd need to add soil acidifier to make it grow. I tried using a soil acidifier to grow some blueberry shrubs and I think it killed them faster than the alkaline soil would have done. What's your take on this?
March 9, 2012 at 12:21 PM

Trees That Please Nursery said…
We have successfully grown Dawn Redwoods for almost twenty years at our Arboretum Tome facility. Those soils were remediated using the power of Humic Acids, applied in the form of Earth Magic (TerraPro). The Arboretum Tome grounds begin as compacted clay soils of alkaline (high) pH. Using Humic Acids the pH was not as much of an issue. Humic Acids participate in making those plant essential mineral elements that a high pH soil cannot normally provide available so that it’s possible to grow the Dawn Redwood. The effect of added Humic Acids is permanent as Humic Acids are a product of soil chemistry and not the decomposition of organic materials like for example, compost. We have also successfully grown the Dawn Redwood at our Trees That Please Nursery facility.

Anonymous said…
I have had two dawn redwoods in my yard in Lubbock for about 6 years now. I purchased them in a nursery in New Mexico. The soil is high in alkaline here. The trees do pretty good early in the spring (they are greening up now). Later during the summer months they start to turn orange then brown as though they are burning up. Last year, during the intense heat wave, the trees looked as though they might die, but they survived and are doing well now. They do grow tall pretty fast.
April 4, 2012 at 9:00 AM

Trees That Please Nursery said…
Our soils here are also alkaline, summers are hot (90's and 100's) during July and August. The Dawn Redwoods are not a drought tolerant tree and require regular water for optimal growth. The browning you describe sounds like an effect of water, too little in a well-drained soil or too much in a heavy clay that is poorly drained. Another cause perhaps might be over-fertilzation. We only feed our Dawn Redwoods with compost in a mixture with Earth Magic and Protein Crumblies.

We have grown Dawn Redwoods for almost twenty years at our Arboretum Tome facility. Those soils were remediated using the power of Humic Acids, applied in the form of Earth Magic (TerraPro). The Arboretum Tome grounds begin as compacted clay soils of alkaline (high) pH. Using Humic Acids the pH was not as much of an issue. Humic Acids participate in making those plant essential mineral elements that a high pH soil cannot normally provide available so that it’s possible to grow the Dawn Redwood. The effect of added Humic Acids is permanent as Humic Acids are a product of soil chemistry and not the decomposition of organic materials.