The Soil Secrets company is currently involved in new product development with the company that invented the first synthetic oil called Amsoil and their Natural Fertilizer division called Aggrand.  The following corn production project used by Aggrand and Soil Secrets.

The photo was taken by Bob Geyer, one of our Soil Secrets associates in California.  Bob also represents Aggrand in California for agriculture.  This field was treated the first year using just the Aggrand protocol and the corn silage yield increased  from 24 tons per acre on the sandy areas of the farm and 26 tons per acre on the better soils, jumping to 38 tons per acre.  At the end of the first year the corn stood at 15' 1" while the variety used called Bagglietto is suppose to only grow to 12 1/2 feet.        The second year the field was  treated with TerraPro and the same corn variety was planted using the same Aggrand protocol as the first year.  This time the corn grew to 15 feet 5 inches tall.  At the time of this blog the silage has not been harvested so the tonnage figures are not known, but Bob calculates it will be several tons greater per acre than the first year.

Here's the full nutrient/Soil Secrets protocol used the second year:
1. At planting 2 gallons of Aggrand 4-3-3 liquid per acre was shanked into the soil
2. At planting 1 gallon of the 0-0-8 Aggrand kelp and potash liquid was shanked into the soil at the same time as the 4-3-3.
3. 1-ton per acre of Soil Secrets Ag Grade TerraPro was  broadcasted across the field.
4. 60 units of Nitrogen per acre using UN-32 liquid was applied at with the 2nd irrigation
5. Field was planted at 32,000 plants per field and the extremely light nitrogen load of 60.64 pounds of nitrogen per acre worked extremely well.  When fields were planted at 64,000 plants per acre using the same protocol the corn sitll reached the 15 plus foot height, showing that the 60.64 pounds of nitrogen was still enough even with double the number of plants. 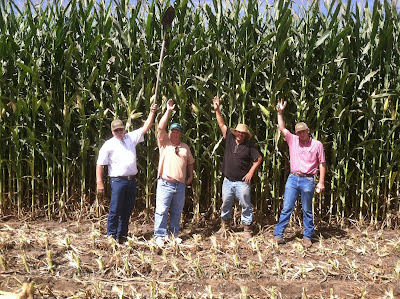