January 29, 2015
Soil Secrets is a Soil Ecology company.  You cannot grow a healthy landscape or a healthy crop without the soil's ecology also being healthy and soil compaction
is a major obstacle to healthy soil.

The following story exemplifies how Soil Secrets has the technology to fix soil compaction problems using the biochemistry of Nature, the Humic molecules.

Our competitors offer Humic Acids in some form or another, with many claiming to be unique formulations.  However if you don't know the molecular description of the molecules involved, it's impossible to modify them in a beneficial way.  It’s important to understand that outside of Soil Secrets, Humic Acids have never been isolated (purified) for the objective of identifying each molecular fraction and describing the molecules, or proving what the chemical properties are of these molecules.    The methods used by commercial or university soil labs for Humic Acid analysis are crude non-standardized base extraction techniques that can only give us an approximate percentage of the Humic Acids in the sample.

However molecular research has been done on the naturally occurring Humic molecules of soil, performed to provide Soil Secrets Deliverables containing this information.   This research contains the only molecular descriptive research on the so called Humic Acids providing Soil Secrets with ownership of this information.    The research with the deliverables was performed under contract with the Los Alamos and Sandia National laboratories under a “Commercial Proprietary Information Contract” an exclusive non discloser contract with Soil Secrets, with femtochemistry services provided by SUPRACHEM, Inc., turning the National Labs analysis work into useful information for Soil Secrets.  As a result of this research we now understand what the Mechanism of Action is of these molecular substances and what makes our “bio-identical” molecular product unique and different from the Humic Acids products commonly provided in the industry.

One of the hundreds of Mechanisms of Action these molecular compounds have is that they make the soil a more livable habitat for everyone concerned, from roots to beneficial soil microbes.  This in turn improves the water and nutrient uptake of the crop which improves the health of the crop and most likely the yield.  Obviously if you could improve the penetration of water into the soil by lessoning the compaction of the soil, that would be a good thing, because as water can percolate you also improve the diffusion of oxygen into the soil.  All roots and all beneficial microbes need oxygen and water so a multitude of benefits are pulled along as you accomplish un-compacting the soil.  This process is accomplished by fortifying the soil with these bio-identical humic molecules, accomplishing something that no other organic soil amendment can accomplish using the same amount of technical material and applied on the surface using the same technique.

The compaction study was performed by Don DeBoer who works for Mid Valley Agriculture Services, Inc.,  in California.  The grower is Charlie Gragnani wearing the gray vest in the following pictures and the guy in the green jacket is Don DeBoer. 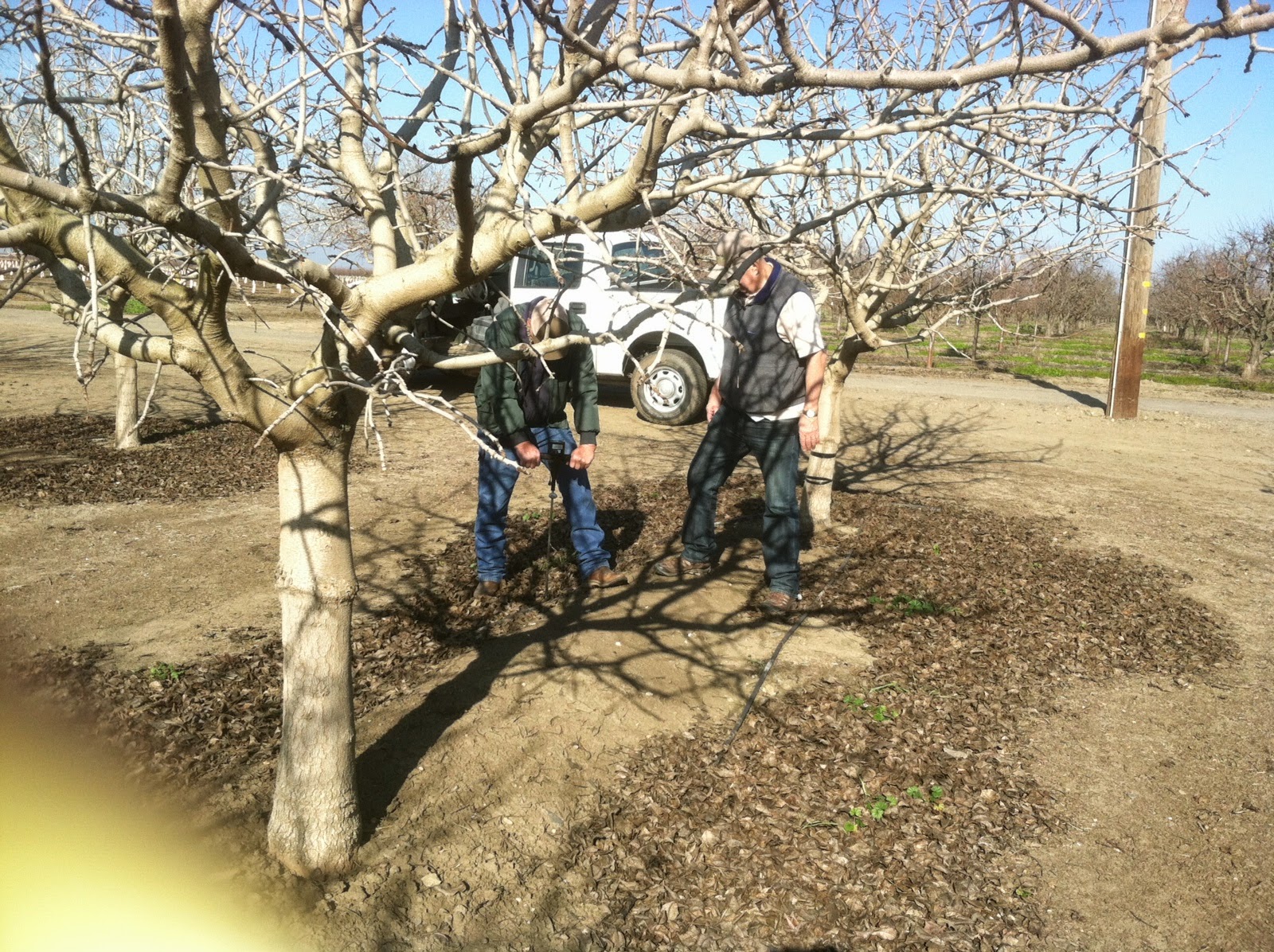 The guy sticking his finger in the dribble line is Richard Holappa, R & D for AGGRAND a natural fertilizer company. 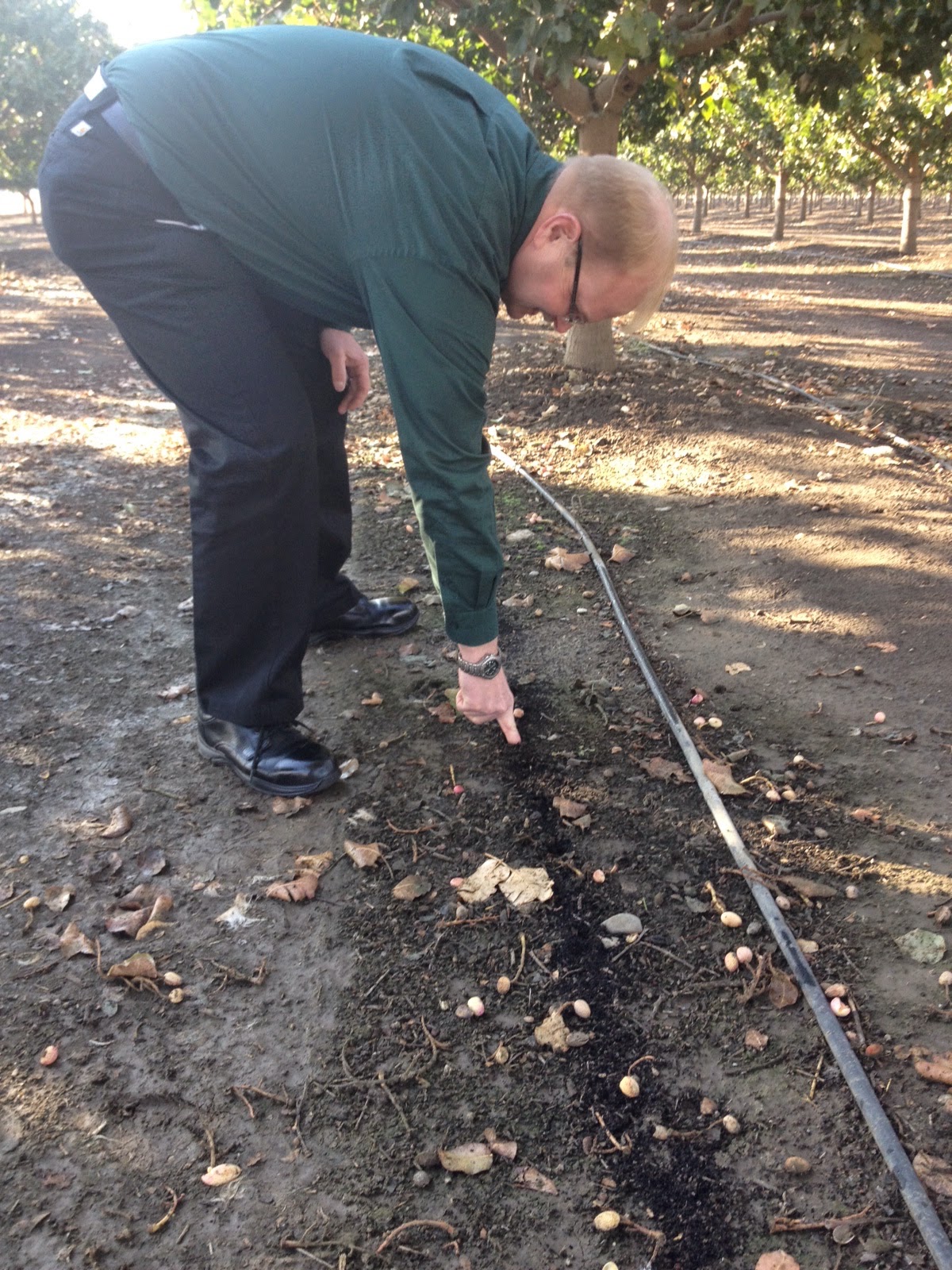 The best way to appreciate what this tests shows is to imagine a block of concrete versus the same size block of sponge.  Which one can absorb water with greater ease and which one can hold more oxygen?  Obviously the sponge! 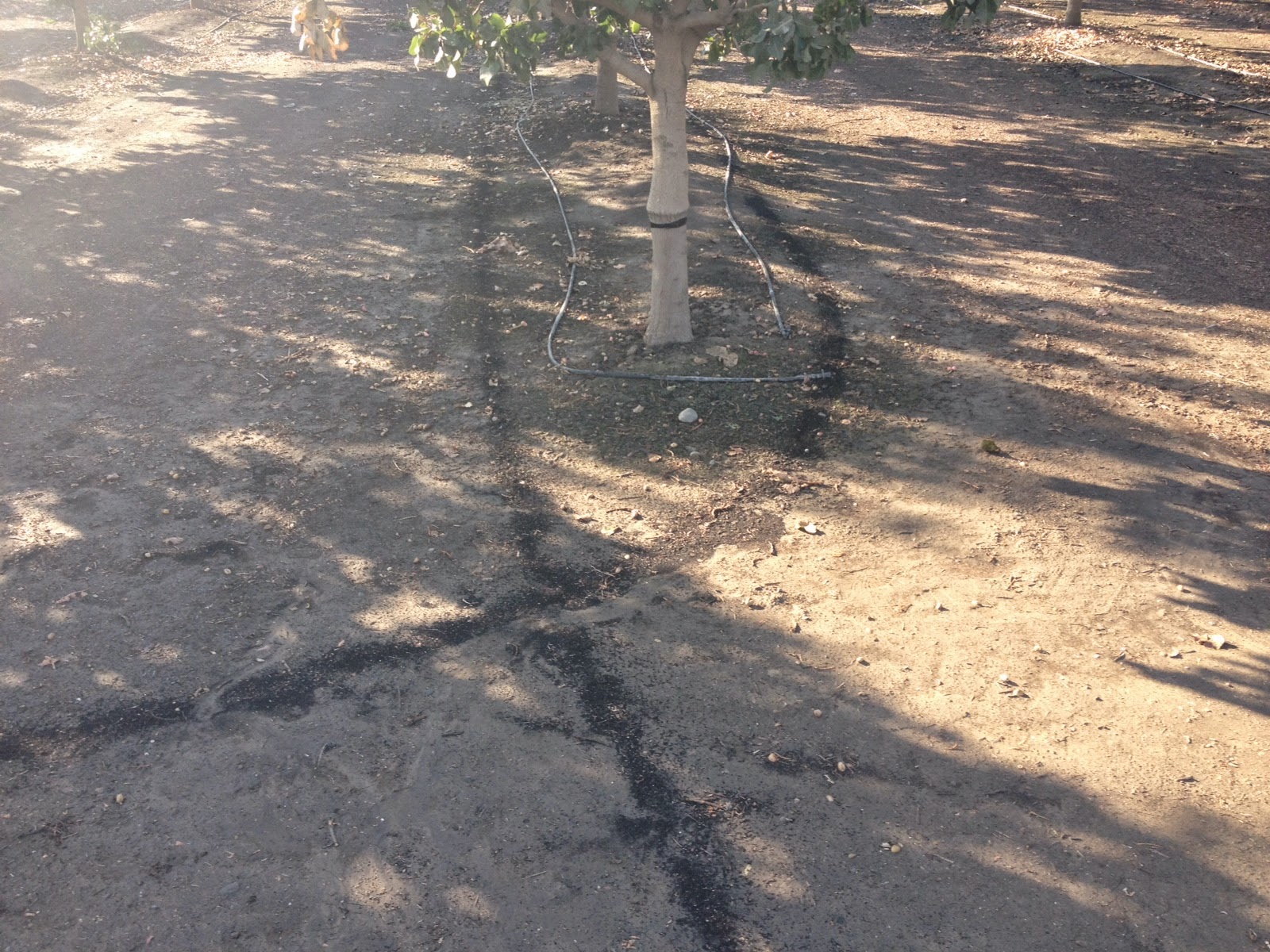 Product was applied in the spring season of 2014.  Compaction of the soil was measured using a probe with a psi gauge, pushing the probe into the soil to a depth of 3 feet. 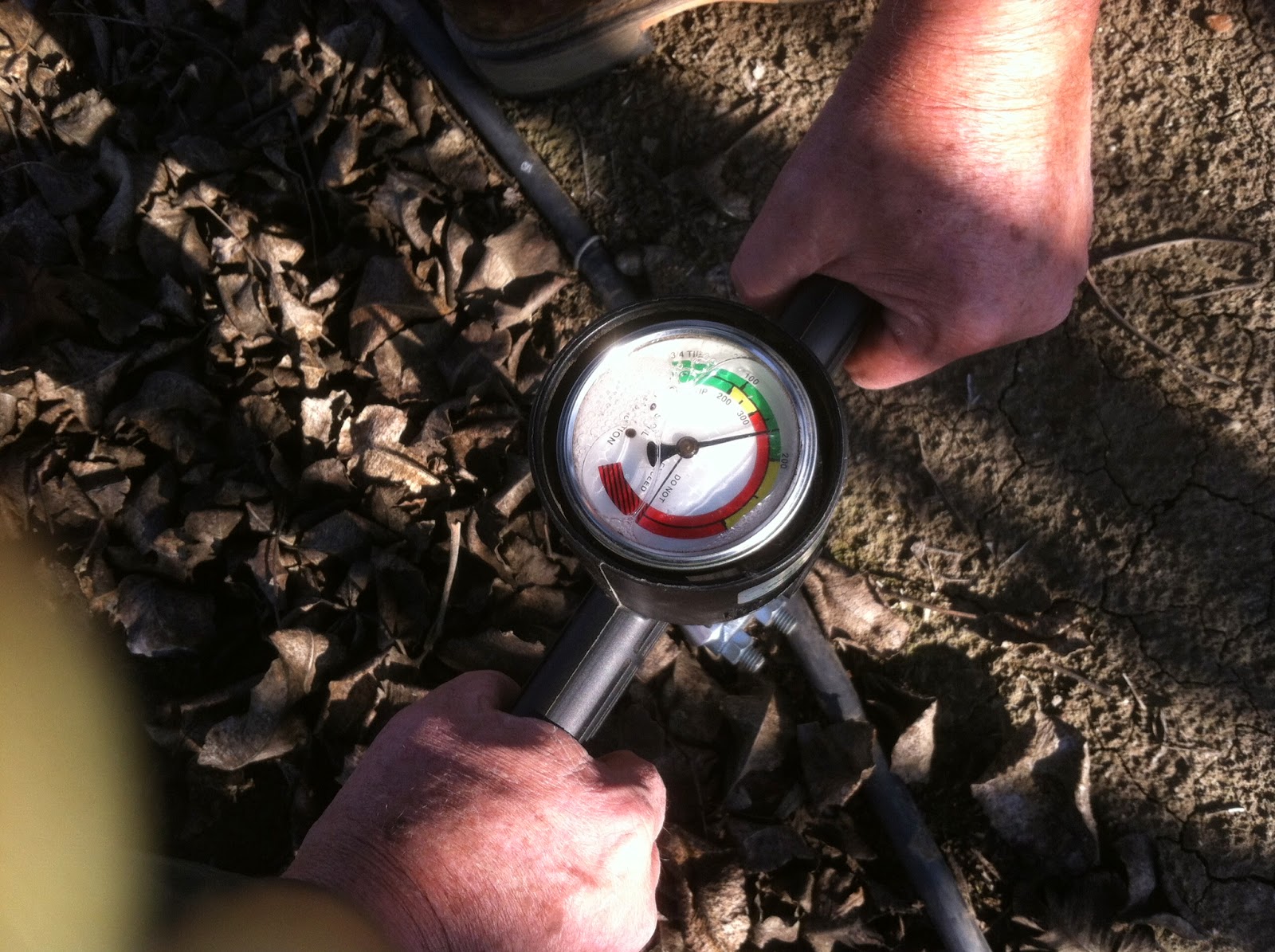 Soil was probed at various locations under the dripline of the tree giving us a range of psi values.

The Experiment Results:    600 pounds of TerraPro per acre changed  the psi from its original 300 psi down to 75 - 120 psi.  Using 1500 pounds per acre the compaction dropped to a low of 50 psi.  One can only imagine how this will impact the salinity and soil health of the soil as oxygen and water can more easily penetrate the soil.

The photo above (3rd from the top) shows the dribble line of TerraPro still obvious months after applying the product, so you can see how it was put down.  It was not broadcasted evenly and it was not incorporated into the soil, yet it still worked changing the soil compaction, while the control untreated areas remained at 300 psi.

The following images were taken in Los Banos, California on the Steve Sloan farm, where the psi of the soil was tested on areas treated with TerraPro and on fields freshly ripped. The first image below shows the machine used to dribble the TerraPro onto the field next to the drip line. 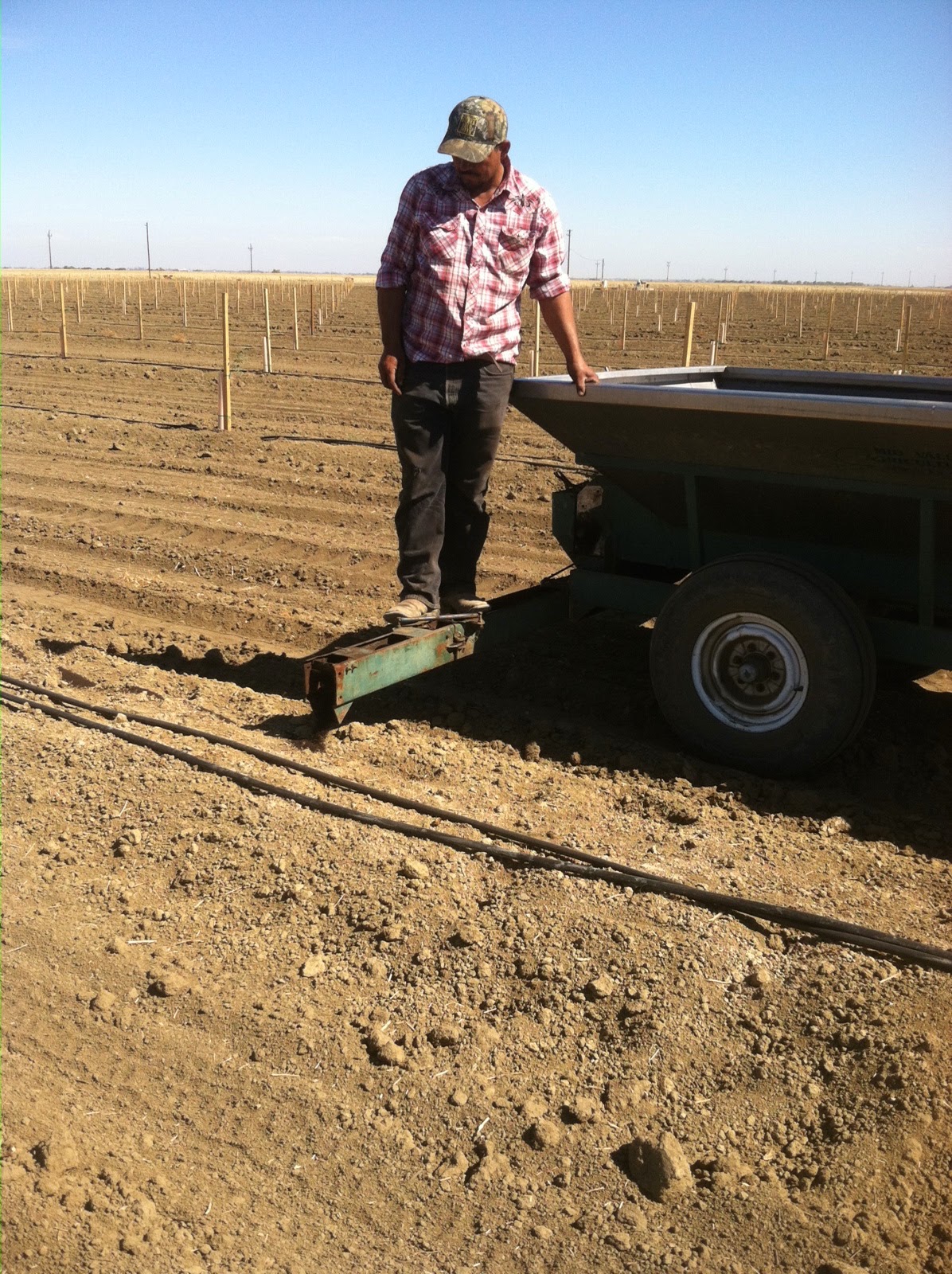 This next image shows Don from Mid Valley testing the soil psi. 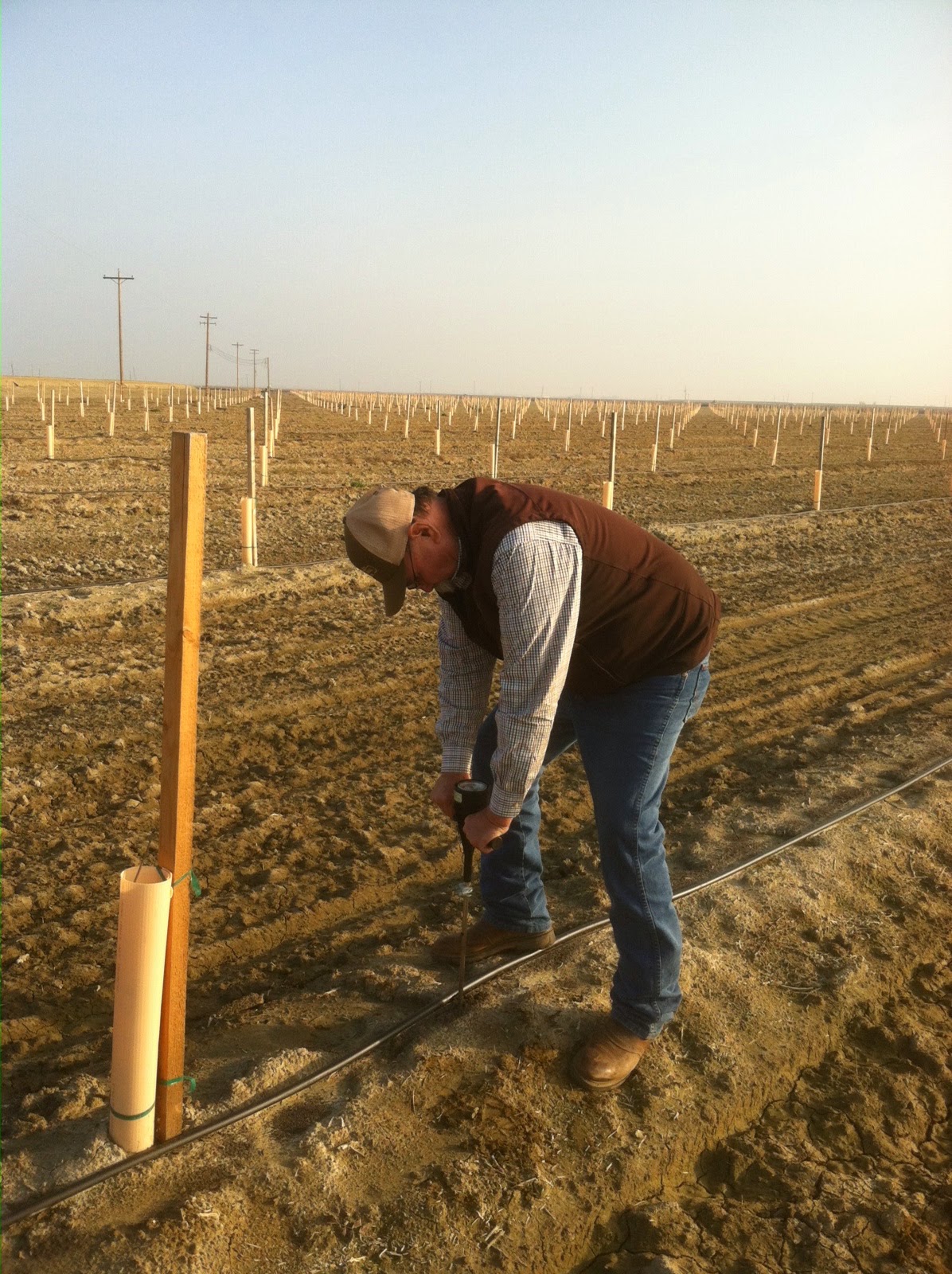